My relationship with money was transformed by a woman I spoke to for just five or six minutes in the early 1990s. We had attended a meditation, and we found ourselves walking to the same tube station. The woman was from India and she told me that she was fresh from a seven year stint in an ashram. To her surprise, her guru had announced it was time for her to rejoin the hurly-burly of the world, and so she had obeyed him. To me she seemed very poised and collected for someone who’d just made such a change in life, including moving to England.

We began talking about money, and I launched into my standard speech. I said I mistrusted filthy lucre, that it was a necessary evil and a source of continual worry. Capitalism is unfair and exploitative, I probably added, and the tragedy of the world since the ‘collapse’ of Marxism was that nobody even attempted to imagine the possibility of a fairer system… And by personally having money I was emulating the immoral running dogs of capitalism…. Etc. Etc.

Bored, and as if talking to a slightly slow younger brother, she said that it was no surprise I was broke, because I had no respect. I should treat money like an honoured guest, she said, and the reason it doesn’t stay with me is because I am so suspicious of it.

We caught different trains and I never saw her again. But her words soon began to play on my mind. As someone who wrote poetry, I was alive to the power of symbols. Soon I decided I would symbolically welcome the Gods of Cash. So that weekend I bought myself the most expensive wallet I could afford, and I loved it: its supple leather was my favourite green and it smelled good enough to eat.

In that first week I received a modest, but unexpected, pay rise. Surely a coincidence? Probably, but this coincidence proved the first step in a rapid change in my earning power. While I will never be a rabid capitalist, from that day the sound of doubloons tumbling into the Kenny coffers makes me happy rather than morally conflicted.

It always amuses me to think this change in attitude was brokered by someone who’d been living off donated lentils in a spiritual retreat for seven years, and was probably the least materialistic person I had ever met.

By chance, I have encountered several people in my life whose chief life purpose is to accumulate money. To me this seems unhealthy because, thanks to my Ashram lady, I have come to visualise money as a person. You are in a relationship with this ‘person’. But who knows of a relationship in which you enslave yourself entirely to someone-else’s service? It’s plainly unhealthy and leaves you open to abuse.

What I think is saner, is to ask your money what is your mission? Or what is it we can do together?

I think I am fairly sane about money, because I know what it’s for in my life. For a start, I have little interest in accumulating things. If fire was to beset Kenny Towers and there was only me in the house, I’d grab my cat Calliope, two of my mother’s paintings, a hard drive of my work and scram.

Nor do I use money to enhance my social status, for anyone who would judge me by the amount of money I earn is an idiot not worth knowing. As I get older, what I need my money for is becoming increasingly easy to pinpoint. I need money to buy the time to think freely.

As long as you choose your own priority – whatever that might be – and not be swept along by what other people think is important, then you are always working for yourself and not for the man.

And this has to be saner, doesn’t it?

Below Charlie Chaplin snacking on his boots in Gold Rush. 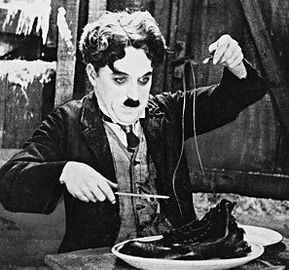 I lead a double life. Identity #1. A writer of poems, comedy plays, dark fiction and the odd libretto. Identity #2: A marketing outlier, working with London creative agencies and my own clients as a copywriter and creative consultant.