Is this the year of The Shakespeare Heptet?

I love the The Shakespeare Heptet. I have previously called them the greatest unknown band in the UK. So I was pleased to catch them in one of their  Brighton Fringe performances at St Mary The Virgin in Kemptown on Saturday 13th May.

The Heptet is designed to have a revolving cast. But on Saturday 13th May, they were playing as a four piece, with Richard Gibson on guitars Silvana Montya, Rebecca Macmillan on vocals, and Aaron Power on percussion and vocals. Their stagecraft is taking great strides. This was a slick performance.

As ever, the music is exquisite. Obviously their lyricist is probably the world’s greatest poet. Their performance, which features the sonnets projected on the brick wall, was abetted by having their context and subject matter pithily introduced by members of the band.

Richard Gibson (in what I first thought of as a bit of a madcap scheme but now is clearly a magnum opus) has now set something like 90 of the sonnets. They are simultaneously timeless and often naggingly catchy. An amazing trick to pull off. What’s weirder is that when I picked up the sonnets again last night, I could hear The Heptets’ voices singing in my head. The sonnets are completely alive and well in the 21st Century.

Is this the year that the world finally catches up with The Shakespeare Heptet? I hope so. Theirs’ is an amazing project.

Photos below: Richard Gibson, shortly before the gig, Richard and his shadow, the Shade of Shakespeare, the band in the church, and The Heptet, left to right, Richard, Rebecca, Silvana and Aaron. 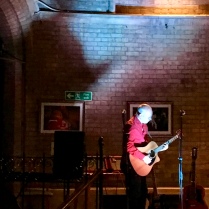 I lead a double life. Identity #1. A writer of poems, comedy plays, dark fiction and the odd libretto. Identity #2: A marketing outlier, working with London creative agencies and my own clients as a copywriter and creative consultant.
View all posts by Peter Kenny →
This entry was posted in Music, Poetry and tagged Aaron Power, Rebecca Macmillian, Richard Gibson, Silvana Montya, The Shakespeare Heptet. Bookmark the permalink.