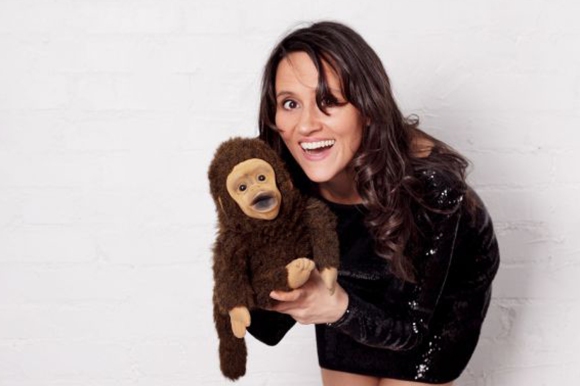 I saw Nina Conti’s In Your Face tour at the Brighton Dome last Saturday. The climax of her show, when she had seven people up on stage, wearing her masks on demonstrated her sheer bravery, improvisational skill and speed of thought in remembering all the accents and attributes she had given them.

She had three moments of darker theatre in her show with Monk, her glove puppet. This monkey has such a strong identity, that despite frequent postmodern allusions to it being a puppet, the audience believes in it all the more strongly.  The shorter first half ends with Nina being hypnotised into sleep by the monkey. Of course when Nina is asleep, the monkey must remain silent and they are carried off stage.

Later Nina climbed into a black sack, with just Monk visible, and the puppet fielded audience questions. This was brave, especially in a large place like the Dome where it is hard to hear everyone, without first having climbed into a sack.

But most of all I loved the end of her show, when she puts the monkey away, then talking to her naked hand finds the monkey is still present, and beginning to take her over and puppet her. This was all over too quickly for me, but was nodding to a darker, more absurd territory that is clearly present for her. I’d be fascinated to see her enter it.