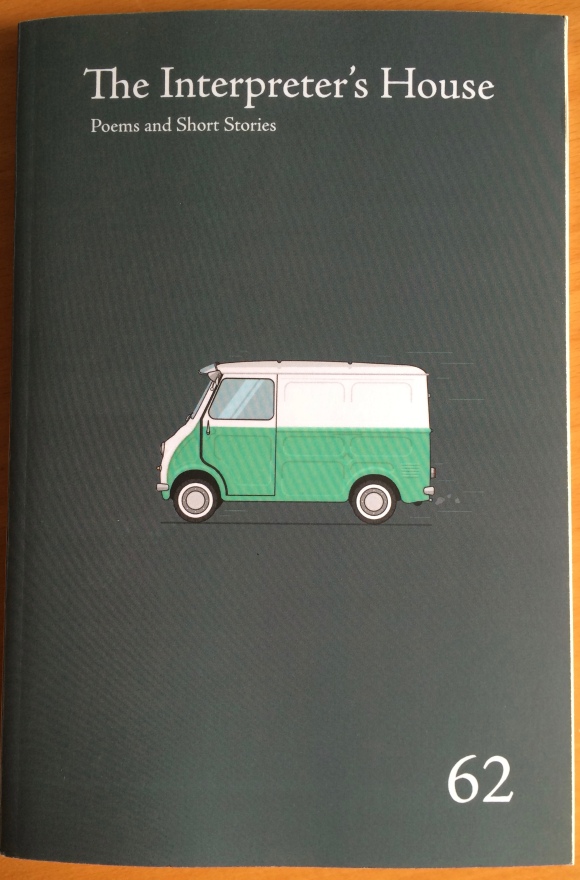 Since meeting Martin Malone, editor of The Interpreter’s House, last year at a reading we were giving in Lewes, and hearing him read excellently (and pyrotechnically as his folder of poems accidentally caught alight) I have finally got my act together to become a subscriber.  In fact I tend to share my limited subscriptions budget around among various titles, so I’ve only just received my first issue. And I’m happy to report that it’s a thoroughly well-edited magazine. I’m still dipping in, and rereading.

The issue featured prize winners from the 2016 Open House Poetry Competition. The winner, Little Things, by Jeremy Wikeley seems to be an object lesson in how to write a winner. Concise, deceptively simple about the space grief takes up in your heart. ‘Little things, like big distances, make all/the difference. In Japan, they’ve made a/skyscraper graveyard.’

It was great to see the Telltale Press posse being heavily represented, poems from Sarah Barnsley, Robin Houghton and Siegfried Baber. To my surprise, I found it also contained an encouraging short review of my pamplet The Nightwork by Neil Young.

Every line insists on attention in Peter Kenny’s The Nightwork (Telltale Press), and yet there’s a lightness of touch to the writing that rendered its craft seamless. An undercurrent of anxiety – and the dangers lurking in our apparent normalities — combine with wit and a fluidity of language to tug the reader along from first to final lines. This is a poet at ease with his talents. Everyday observations juggle with snapshots from mythology and history, but nothing jars. The opener, ‘A Sparrow at 30,000ft’, holds out a wry foretaste of what’s to come, with the speaker internalising reassurances that are sure to prompt an amused nod of recognition among readers: “Cattle class, in clear air turbulence / this shuddering is perfectly normal”.

Robin’s The Great Vowel Shift, was reviewed too. He found a ‘camera-panning quality to some of some of these observations’ and he particularly liked Robin’s ‘Fermata’, with its ‘intimations of menace and unresolved sorrows’ and concluded ‘These are impressive collections from Telltale’.

So good job I subscribed then!

A perceptive review of The Nightwork can be found here. The reviewer John Forth poses a question I find particularly interesting, by opening his review with this thought:

I used to wonder whether some poets have a hot-line to the unconscious or are merely adept at making it seem that way. Now I save time and ask what’s in it for me. Peter Kenny’s work is fun of a serious kind. He’s been published at Guernsey airport and on the island’s bus fleet, and most of his trips to a hinterland of waking dream in this pamphlet will do his reputation no harm.

Actually this nails something obvious about my own work that I’ve managed not to see.  I love the deep resonance of symbols, mythology and what they reveal about the subconscious. John’s thought, however that ‘now I save time and ask what’s in it for me’ is spot on. Unless the process of psychological exploration reveals something that is illuminating for the reader too, you are just talking self-indulgently to yourself – and this is something I need to be particularly mindful of when I write.

I guess it’s like those people who tell you about their travels, but somehow make exotic places seem tedious and their experiences merely self-indulgent.  I don’t want my poems to do that at all.

A welcome review of The Nightwork is to be found here in Antiphon magazine by Ian Badcoe.

At last a moment to reflect on the Telltale three week mini-tour, which ended on October 1st at the Poetry Cafe with Robin Houghton and I reading with the excellent Rishi Dastidar and Anja Konig. I enjoyed all three readings immensely, not least being able to sit back and savour the work of poets like Robin, Rishi and Anja.

Rishi’s work is fascinating. I think it extremely accomplished with a lovely fluency and flow, and included some deft wrong footing and surprising turns which made it a treat to listen to. Definitely one to watch. I also loved Anja’s work, as she read from her new pamphlet Advice for an Only Child. There was a beguilingly light touch about her work. I’d love to hear her read again see some of her work here.

It has been about twenty years since I have read this regularly. And over the course of the last week the reason why I stopped doing readings and engaging with the ‘poetry world’ seems obvious. It is to do with the death of a close friend Tim Gallagher.

Tim and I used to collaborate lots, which culminated in us staging plays together at the Water Rats Theatre in London. He was like an infuriatingly talented older brother and as his death loomed (at the age of 37) I spent a year or so trying to help him as best I could, in getting a book of his produced, helping him to arrange performances from which he would literally climb out of his hospital bed to perform and so on. Somehow my great sadness at his death and that of his wife Rosa, who survived him by six months and whose hand I was holding when she died, weirdly blocked me from performing and promoting my own work.

Now it seems obvious that on some level I felt guilty to have survived when Tim and Rosa had not. The result was a big roadblock of guilt, that meant that although I still wrote poetry, performing it and promoting it felt weirdly disloyal. I think I am a fairly self-aware person but it has taken me years to unpick this. And it now seems no coincidence that three of the poems in The Nightwork  (Cicada, Postcard from Ithaca, and After death, at dawn) are about Tim.

For Robin and I the launch of Telltale is naturally an exciting thing to do. But personally it was a huge catharsis. Proof, if any were needed, that just getting on with what is important to you can be unexpectedly beneficial.

Below Robin Houghton, Anja Konig, Rishi Dastidar and myself in the poetry cafe.

The Telltale tour rolls on. This week in the very smart interior of The Cameron Gallery in Hove. Some gorgeous visual art in there, and well worth a visit. Joining Robin Houghton and I this week were Catherine Smith, and John McCullough.

Despite me having to borrow Nick’s glasses having left my at home, I felt less nervy and was able to thoroughly enjoy Catherine, John and Robin’s readings – three poets at the top of their game. Listening properly I had a different view of Catherine’s work after this reading, and one poem’s imagery of sewing people’s lips up has unnerved me for days afterwards. John’s work on first encounter was scintillating. A poem about Tintin in Brighton could have been custom written for my mate Anton, who came to his first ever poetry reading having steadily ridiculed poetry for the two decades we’ve been friends. He came away curiously converted.

Robin and I are also hugely grateful to our respective partners Nick and Lorraine for being behind the scenes stalwarts. Next stop: London’s Poetry Cafe on Wednesday 1st October at 7:30.  Can’t wait.

Below slightly weird light/colour conditions in the gallery for iPhone snaps. But below, Catherine Smith, Robin Houghton, John McCullough and I.

Just a swifty… Last night was The Telltale Press launch for Robin Houghton’s The Great Vowel Shift and my The Nightwork.  I felt lucky to be reading from my new pamphlet in the company of the excellent Catherine Smith and Robin Houghton with a attentive and supportive audience in Lewes, which is a town full of writers.

I can’t wait now for the next Telltale reading on Wednesday 24th September, at Cameron Contemporary Art, Victoria Grove, Second Avenue BN3 2LJ at 7:30. This time Catherine Smith, Robin Houghton and I are joined by John McCullough. Should be another great night – it is a guest-only beano so email publish@telltalepress.co.uk if you’d like to come along.

My wife Lorraine took these snaps of me mid-flow…. and good to know that they conform to the norm for such photos, i.e. a bloke with his mouth open. 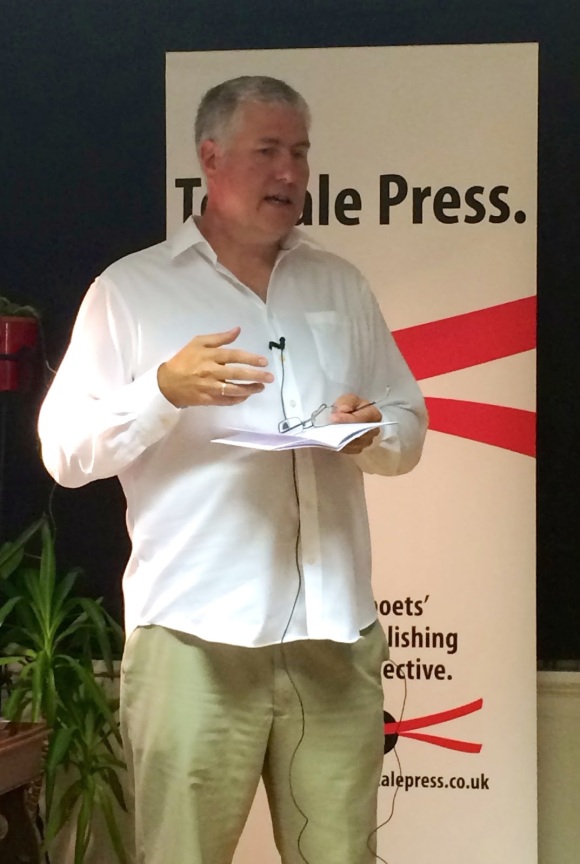 A hectic time for Robin Houghton and myself is upcoming, as Telltale Press starts its inexorable rise to poetic world domination with three showcase readings. I launch my pamphlet The Nightwork and Robin will showcase her just-published, The Great Vowel Shift – and we will be joined by some amazing poets over the three shows.

The first two events are invitation-only. For your invite to the Lewes or Brighton and Hove event simply email publish@telltalepress.co.uk or contact me through this site – and I’ll be sure you’re invited.

As well as it being the first launch of The Nightwork it is also an opportunity to meet Telltale’s resident cover artist Hannah Clare there will also be drinks, nibbles and music.

The final reading is in London’s Covent Garden.

Satisfaction, vulnerability and a strange sense of shedding an old skin. It’s not every day you see your name on a new cover.

I collected a box of author’s copies of The Nightwork this weekend. Thumbing through the pages looking at the poems it contained, each one arising from (though not necessarily about) a particular episode of my life.  It’s a curious feeling to see these strings of words turned into a physical object.  I look at the pamphlet like a lizard examining its discarded papery skin. A curiously good feeling.

One of the really happy things about the collection is that I asked Rhona McAdam, whose poetry I have been reading for decades, to write a blurb for me. She did me proud. “In The Nightwork, Peter Kenny revisits the traditional hunting grounds of poetry – art, myth philosophy, history – and returns with fresh poetic plunder. His material ranges from the personal to the fanciful as he deftly lures us into an original poetic world with rich and supple language. An overdue collection from this fine poet.”

I called the collection The Nightwork, for the non-amazing reason that lots of the poems have a nocturnal flavour and were written at night. But also because some its recurring emotions – guilt, sadness, powerlessness and suppressed anger – seem to be the kind of things that plague you waking up in the middle of the night.

I am delighted with the way this wee collection turned out. With its cool cover from Hannah Clare, The Nightwork will be launched at readings alongside Robin Houghton, and her excellent The Great Vowel Shift in Lewes, Brighton and London soon. More details here when these dates are finalised. 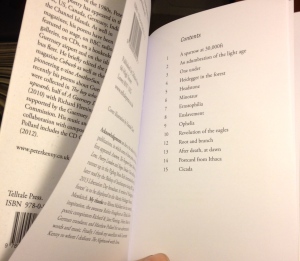 Just received the cover illustration by Hannah Clare for my forthcoming Telltale Press pamphlet The Nightwork. And I am really pleased with it. It is deceptively simple, but the more I look at the more I notice in it.

I wish I’d actually finished neurotically finalising the selection of the poems inside it. Luckily my old friend, the excellent Canadian poet Rhona McAdam has agreed to offer me some adult supervision.

I’m calling it The Nightwork for two simple reasons. The poems I’ve earmarked are quite dark and dreamlike and — even more prosaically — most of the poems in it were written at night. Bird imagery often crops up in my poems, which Hannah has nicely reflected too.