To say Charlie Hebdo’s provocative satire is not always understood outside France, is an understatement. See this take on the magazine by Arthur Chu. And its satire was not to many people’s taste in France too, judging by its usual circulation — but of course everything’s different now.

This cultural incomprehension reminded me of a time a couple of years ago when I was simultaneously working for French clients and US ones. For in the grubby business of Marketing, such incomprehension not only causes mutual bafflement, but costs people money.

My French client had asked me to write English copy for several French companies hoping to infiltrate the UK market. I was juggling this with freelancing in a London agency, having been asked in to create concepts for a pharmaceutical product launch for a US-owned healthcare agency.

The French wanted what seems to me to be florid, overwrought copy. I found myself constantly pushing back, and explaining that in the UK if you seem to be trying too hard, the UK consumer smells a rat. For a UK reader, copy that’s forested with adjectives and adverbs can be tiresome to follow. I was assured by my French clients, however, that this was often seen as hard-working, persuasive and – what’s more – beautiful copy in France. Luckily, with lots of explaining and laughing at each other, we managed to reach a compromise – but the process took much longer than it should.

Meanwhile the afternoon teleconferences with the New York office were baffling. The US creative directors were unerringly drawn to what seemed, to my English eyes, crazy ideas. Anything psychological, or on a human scale was instantly rebuffed. One concept, however, that was particularly liked was an apocalyptic earthquake with hundreds of people tumbling into the gaping maw of the splitting earth. This was to suggest the dangers of a medical condition. I sat baffled as the US team earnestly discussed this absurd execution, which also dramatised the problem rather than the solution. It reminded me of the apocalyptic English romantic painter John Martin – but not in a good way.

It goes without saying that the US is full of talented, smart people in agencies, who care passionately about the product and doing the right thing by their clients. It was in the US I first understood that UK creative work can seem half-hearted, underwhelming and small-scale. The reasoning in this instance was that the disease area we were tackling was a big problem to the people who had it. So we should acknowledge and reflect the scale of the problem as felt by the people living with it.

Perhaps it is lazy to say this is about irony. But I honestly believe the UK sense of irony and understatement is at the root of mutual incomprehension of the concepts that ping across the pond in teleconferences Death by PowerPoint and PDFs. I believe that it is assumed in the UK that the audience knows the rules of the marketing game, and not to implicitly acknowledge that means the idea won’t be taken seriously. Some ideas bridge the gulf, of course, but it very optimistic to expect a concept to fly in every territory.

So if these gulfs are tricky in marketing a single product or brand, how much more so are they when entire cultures, countries, religions misapprehend each other. The clue was in working with my French clients, and ultimately with Charlie Hebdo: learn to laugh at them.

1. Opening ejaculation. This mimic the reaction of crazed, bug-eyed excitement the person who has just seen this list of images must emit. Sometimes these ejaculations are inarticulate Wow! or Woahs! If the ejaculation is allowed to forms itself into words then it must reflect how the target audience will speak. So… Too cool! OMG! Awesome!.

2. What it is. Right after this expression of unconstrained excitement you get to the meat of it. Sometimes this can be quite prosaic as in 54 “Colorized” Photos Will Blow You Away. The blow you away part is there because the notion of colourised photographs may have momentarily dampened your clicking ardour.

3. The number.  People love lists, of course, but they also like to know that they are letting themselves in for. The click is a tiny leap of faith, and one only to be taken when you know you are going to get 20 photos of RiRi’s wardrobe malfunctions for example, before we take our life in our hands.

4. The Special One. The final part of this formula is The Special One. I know I promised Number 4 would stun you, but it doesn’t matter what it is, as long as it is far enough down the list to keep us scrolling through to reach it. Is it that special? Clue: it ain’t.

5. Click bait tempts us when we are aimless. It isn’t called bait for nothing. There’s a hook in there somewhere, able to snag in and drag us deeper into endless, ever more meaningless lists.

While click bait headlines are an effective formula to meet the standard marketing challenge of having to announce something, they are cheesy. Is it just me, or is this formula already on the wane? One thing’s for sure. There will come a day this click bait formula will seem so quaintly retro, that people will shake their heads in wonder that we ever took the bait.

Frankly I’m not feeling man enough this morning to find exactly where in the interminable Being and Nothingness Jean-Paul Sartre starts talking about waiters, but when he does things get interesting and surprisingly practical.

Picture yourself smoking cigarettes in a Parisian cafe, sitting opposite Sartre. Looking at a miserable, surly waiter Sartre observes that the waiter’s problem is that he has become his job. If you asked the waiter what he was, he’d say ‘I am a waiter’. If you criticised his performance as a waiter he would be cut to the quick. (Sartre calls this living in ‘bad faith’.)

There is another waiter, however, who is full of banter and good cheer. His happiness, according to Sartre, is because he remembers that his job as a waiter is the result of his own choice. He has chosen that very morning to get up and come to work. If you asked him what he was, he’d say ‘I am a person, who happens to have chosen to work as a waiter’.

The cheerful waiter sees himself as a person, not as a waiter. He makes sure he separates what he does for a living from who he is as a person. (Sartre calls this living ‘authentically’.)

The most helpful thing the idea of living authentically has done for me is to enable me to cope with rejection.

The worst way to receive a rejection, and believe me I have been there, is to see it is a rejection of you and all that you stand for. Experiencing rejection this way is unbelievably painful, and can provoke bouts of rage, self-loathing or at the very least a good deal of sulking.

Much better, and far saner, is the Sartre way. To accomplish it, you have to separate yourself from your work.

Remember too that the rejection is usually made by a single fallible person with specific tastes. The sane way to see the rejection is therefore that one of your pieces, written last May, has been rejected by one person. It is NOT a rejection of you, merely of a thing you once made.

Having your work rejected is never fun, but this perspective has certainly helped me keep my sanity.

As a final observation, I remember a specific poem that had been roundly rejected by everyone I sent it to. I kept it in my drawer as I thought it was pretty good. Ten years later the same poem was snapped up by the first person I sent it to at a top magazine. Sometimes you have to accept that the world is not yet ready for the thing you have made, which is why you should think twice before throwing your work away.

Below Jean-Paul Sartre and Simone De Beauvoir, thinking about waiters. 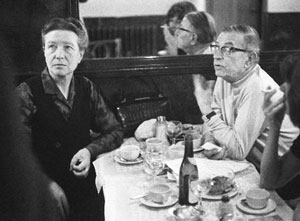